To arrange for a presentation, contact the speaker directly with the form provided on this page or call 563-382-9681. 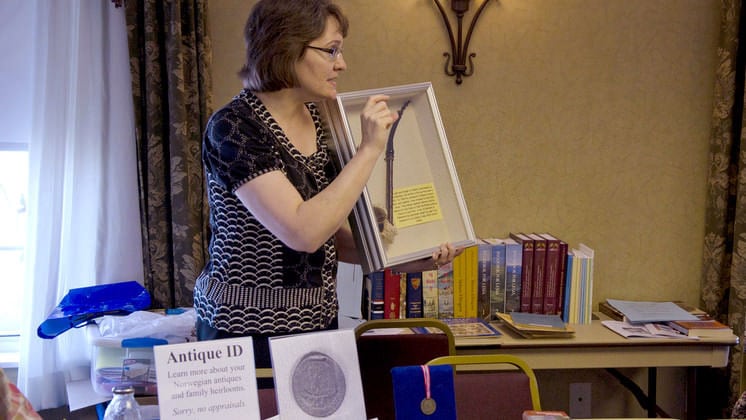 Vesterheim staff members can give presentations to cultural, community, and church groups on a variety of topics. Staff members will give presentations to groups visiting Decorah and to groups in their own towns (subject to schedule availability). Below is a partial list of prepared speeches. For additional topics, contact Molly Thompson, Vesterheim Annual Fund Gift Officer, mthompson@vesterheim.org.

All groups are expected to give a donation to Vesterheim as an honorarium. If speakers travel outside of Decorah, hosting groups are required to pay round-trip mileage at the IRS rate (currently $.50/mile) and, for evening presentations, provide overnight accommodations (motel or private housing).

Bring a favorite piece and learn more about your Norwegian antique or family heirloom. Laurann Gilbertson will help you learn about your object’s age, origin, and function. Please note that she cannot give valuations or appraisals.

Some of Vesterheim’s most spectacular examples of folk art were sent as gifts in the 1920s and 1930s from Norwegian museums. “May these objects work so that the Norwegian-ness in you will not die too soon, and the connection with the homeland will because of this be tighter,” they wrote. Learn about this generous gift of more than 400 artifacts in wood, wool, silver, and iron.

The History of Norwegian Sweaters

Learn about the history of different types and styles of Norwegian sweaters, including Setesdal, Fana, Marius, and Olympic. Gilbertson will also talk about the symbolism behind some of the patterns and colors on sweaters made today. Be sure to invite your audience to wear their favorite sweater. Or look more broadly at Nordic knitting in A History of Norwegian Knitting.

Patterns of the New World: Quilts from the Vesterheim Collection

Can you imagine a time and place without quilts? It may be hard to believe, but few Norwegians in the nineteenth century had ever seen quilts. Immigrants to the United States needed quilts for warmth and to help their homes look more American. Quilts from Vesterheim’s collection tell the story of the immigrant experience between 1860 and 1940. Enjoy the general program or focus in on Religion and Norwegian-American Quilts. Both are thirty-minute presentations with slides.

For centuries, Norwegians have treasured the beauty of silver. Silver showed the prosperity of a family, and, according to folk belief, could cure sickness in humans and livestock, improve crops, and protect against storms and evil spirits. Brooches were more than simple shirt fasteners. This program (with slides) describes different styles of silver brooches jewelry, and the beliefs surrounding this powerful metal.

All Tradition is Change

Explore and expand your ideas of what is “tradition” and “traditional” while looking at historical objects and pieces made today by artists working “within the tradition.” Examples are textiles from Norway and Norwegian America: weaving, quiltmaking, embroidery, baptismal garments, and knitting.

Based on the popular exhibition, this presentation explores the life and work of Norwegian-American sculptor Sigvald Asbjørnsen, who lived from 1867 to 1954 and was a well-known figure in Chicago’s Norwegian art community. Sculptures (monuments, busts, reliefs, and interpretive works) are featured, along with the pastel drawings Asbjørnsen preferred in his later years.

Norway’s tradition of colorful folk costumes is as old as the Middle Ages, and as young as the 1940s. Learn about the history of costumes from Hardanger, Telemark, Hallingdal, and many other regions of Norway. The forces of politics, fashion, and immigration have left their mark on this important part of Norwegian and Norwegian-American folk culture.

The Extraordinary Aprons of Evelina Grimes

Aprons are usually utilitarian accessories, but a large number of aprons, now at Vesterheim, were made by one woman for the reasons of self expression and public entertainment. Evelina Oppegard Grimes was well known to Minnesota community groups in the 1960s and 1970s as the creator of “apron art.” The program introduces Grimes, then focuses on the themes and decorative techniques used on the 122 aprons.

In farm homes all across Norway, women wove warm, wool coverlets for their beds. These colorful coverlets, called åklær, were also used as wall hangings on festive occasions. They played important roles during baptism, weddings, and funerals. They came to America with the immigrants and were an important reminder of their life in Norway. The presentation is illustrated with images of many Vesterheim’s 140 coverlets.

This slide presentation profiles Norwegian artist (landscape painter, muralist, book illustrator) Gerhard Munthe and his rocky road to tapestry design. Munthe was active at the time Norway was gaining independence from Sweden and his work was seen as being in a new “national” style. The tapestries woven from his designs became famous for the dramatic folk tales they depicted.

There are always exciting things happening at Vesterheim Norwegian-American Museum. Find out the latest news about exhibitions, events, and other programs.

Involve Me and I’ll Understand: Engaging Youth at Vesterheim Museum

Learn how Vesterheim is helping kids make sense of history and culture through hands-on, object-based learning experiences. Two innovative programs serve hundreds of third and fourth grade students throughout the school year by immersing them in authentic, meaningful, and fun (!) activities that utilize the museum’s broad collections as a lens through which to view and better understand specific time periods or events in U.S. history as well as the numerous cultures that have contributed to American society. Activities may be adaptable for your community or organization.

“A hundred higher schools in a hundred years! That is the mark reached by the Norwegians in America.” Academies, preparatory schools, colleges, and seminaries were established in many Norwegian communities throughout the United States. Very early in their history, Norwegians in America agreed upon the need for schools of higher education; however, they could not always agree upon how and sometimes even where to do this. Learn about some of the nineteenth and early twentieth century doctrinal controversies and personal conflicts within the Lutheran churches that produced these schools and even helped some survive into the present day.

Deaconesses, women called to serve the church and humankind, come from a tradition dating from Biblical times to the Middles Ages. Their work was revived in Germany in 1836 and the “modern” diaconate spread to Europe and America. There were three Norwegian Lutheran Deaconess Motherhouses in America—in Brooklyn, Chicago, and Minneapolis. This slide presentation introduces audiences to the women who were deaconesses and their work in hospitals, church parishes, social services, and foreign missions.

The murals in Vesterheim’s Gathering Room were created in 1999 by Norwegian rosemaler Sigmund Aarseth and Iowa rosemaler Sallie DeReus. The murals are an example of interior painting, relatively common in Scandinavia, in which every surface is decorated. The murals are inspired by the primstav, a calendar stick widely used in Norway during the Middle Ages. The initial purpose of the primstav was to help keep track of Saint’s days and the church year when Christianity was adopted in the eleventh century. Over time, however, the primstav acquired worldly calendar associations that had to do with seasonal agricultural and domestic activities.

Whether you’re doing genealogy, or just trying to sort through your family’s old album, this 45-minute slide program can help you assign a date to old photographs. Women’s clothing styles have changed regularly and distinctly over time. By looking at a few fashion features, such as hats and dress sleeves, you can easily narrow down the date to a single decade.

IN TRUNKS, HANDS, AND HEARTS: WHAT NORWEGIAN IMMIGRANTS BROUGHT TO THE UNITED STATES

Between 1825 and 1980, nearly one million Norwegians left for new lives in America. Consider the reasons for leaving, what they brought, and where they settled. Explore the immigrant experience through stories associated with artifacts in Vesterheim’s collection. The presentation can be customized with artifacts from your state.