Vesterheim members Bob and Mary Lake from Wisconsin have many hobbies, and it seems kindness is one of them.

Maybe you know Bob and Mary from taking a class together with Vesterheim’s Folk Art School, or perhaps you’ve crossed paths at Decorah’s annual Nordic Fest. Or maybe, just maybe, you’ve been lucky enough to be on the receiving end of one of Bob’s ornaments with chip carving.

Eighteen years ago, Bob and Mary had just moved back to the Viroqua, Wisconsin, area and were visiting the Vesterheim Museum Store. You could say Bob was on the lookout for a new hobby and two books about chip carving by Wayne Barton and Barry McKenzie caught his eye. Bob and Mary both did figure carving, and Bob has considered himself a woodworker since the time they were married 53 years ago. Throughout his lifetime, Bob has made many pieces of furniture – especially rocking chairs – in his home shop. Bob makes this sound easy, stating, “The first Christmas after we were married, I told Mary that all I needed was a Skilsaw. It was $25 from Sears, and now I have a shop full of tools!” With his new books about chip carving and a new knife, a tradition was born.

Bob started to study and practice the patterns in the books and selected a design to create a batch of Christmas ornaments to share with family and friends. The next year, a new design was chosen and Bob got to work chipping. Soon he was creating his own designs. This Christmas, Bob will present family and friends with their 18th annual ornament – the design remains top secret until the big reveal!

About 10 years ago, Vesterheim joined Bob’s “family and friends” list. Now he carves 50 to 55 ornaments each year and donates some to the Vesterheim Museum Store, where the sales support Vesterheim’s mission. Bob says, “That should cover my family (plus Mary’s), friends, and my favorite place . . . Vesterheim!”

In the midst of the COVID-19 pandemic and at the start of Vesterheim’s online programming initiatives, Bob thought of a way to express his gratitude and share kindness with Vesterheim’s community. He reached out to staff, asking if it would be okay to drop off a box of ornaments to send to some of the online presenters, adding, “I thank you folks at Vesterheim for making this unfortunate COVID-19 episode bearable by keeping many of us able to experience such exciting programs from the safety of our homes.” Since that time, Bob’s ornaments have reached 55 instructors and presenters for Vesterheim’s online Folk Art School programs.

Bob reflected on his motivation for this project and the meaning of their Norwegian heritage, sharing, “Vesterheim has become a valued part of our lives . . . where we feel the reverence for those who came before us to our vesterheim (western home). I enjoy contributing my little ornaments to whatever good they do.”

When he is not delivering chip-carved ornaments to Vesterheim, Bob keeps busy with cross-country skiing in the winter and biking the various trail systems in the Driftless region in the summer. After 34 years in the classroom, Mary continues to teach whatever skills she has learned from free-motion quilting, Norwegian knitting, lucet braiding, bread and lefse baking, gardening, and her latest hobby: Sámi bracelet making, which she learned through Vesterheim Folk Art School. (The sweaters and quilt in the photos are examples of Mary’s handiwork).

We remain eternally grateful to our friends Bob and Mary Lake for the kindness they share and for their generous support of Vesterheim. They are members of Kroneklubben, the museum’s “Crown Club” for lifetime giving, and the Valhalla Society, Vesterheim’s planned giving program.

If we know Bob – and we do – he is probably taking an official Norwegian coffee break right about now, and then perhaps he’ll get started on next year’s ornament. 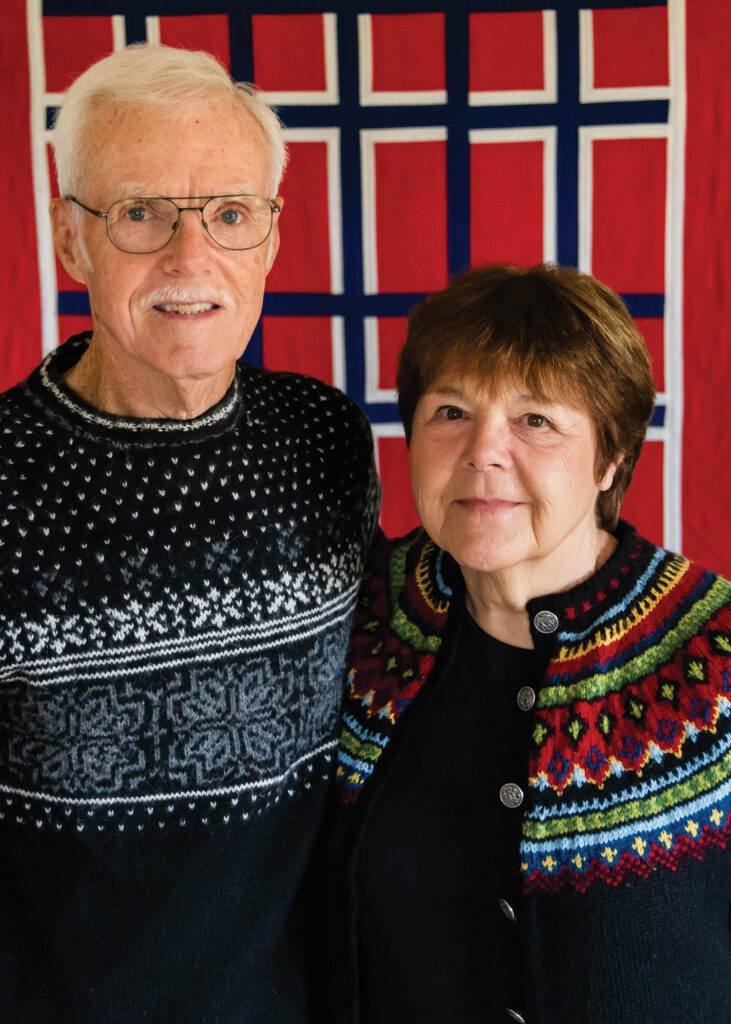