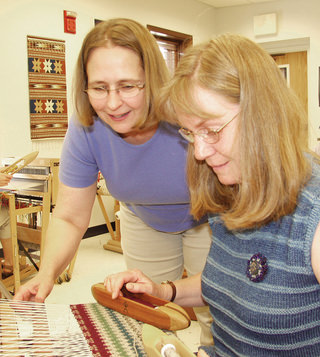 Jan Mostrom, from Chanhassen, Minnesota, has been a weaver for over 40 years, with a special interest in Scandinavian textiles. She has taught weaving throughout the Midwest, and her patient and encouraging instruction creates an inspiring class atmosphere for weavers of all levels! Jan earned a Vesterheim Gold Medal in 1999 and is a longtime member of the Weavers Guild of Minnesota’s Scandinavian Weavers Study Group. She learned to weave from Lila Nelson, master weaver and Vesterheim’s first textile curator, while she was a student at Luther College in Decorah. Since then she has studied with many Scandinavian teachers in the United States and in Norway and Sweden. Her work was included in Norwegian Folk Art: The Migration of a Tradition, a 1995 traveling exhibition curated by Marion Nelson, former Vesterheim Executive Director, and the exhibition book by the same title.