It All Started with a Loom: How Lifelong Learners Jim and Kathleen Almelien Found Their Way to Vesterheim’s Online Programming

Vesterheim members Jim and Kathleen Almelien from Washington, Iowa, have become familiar faces to many in Vesterheim’s folk-art community, thanks to their frequent attendance of online classes, presentations, and events. Since Vesterheim’s online programming began in July of 2020, Jim and Kathleen have signed on for close to 100 programs between the two of them. If Vesterheim had an award for “Best Attendance,” the Almeliens would probably be given this honor!

It might seem like Jim and Kathleen, who have been lifetime members of Vesterheim since 1984, have always been this involved with Vesterheim’s Folk Art School. Yet that’s not how their story is woven together with Vesterheim, and it takes not just one, but two special looms to tell it.

A long time ago in Sigourney, Iowa, a blind date brought Jim and Kathleen together. Kathleen was in need of someone with a truck to help her pick up a loom she was purchasing the following day, and Jim fit the bill. Kathleen shared, “A loom is one of the bright spots of our togetherness.” They will celebrate their 50th wedding anniversary on December 31 of this year.

After they met, Kathleen went away for two years to Knoxville, Tennessee, to get a master’s degree in metalsmithing. “That was where I learned the honor and pride of things that are homemade,” explained Kathleen.

Jim grew up in a Norwegian family of dairy farmers. His grandparents immigrated to the United States in 1901, coming through Quebec and eventually settling in Hanlontown, Iowa, north of Clear Lake. Jim recalls that when his grandmother was alive, the entire family was expected to speak Norwegian in her presence. After her passing when Jim was six, Jim’s father told him they wouldn’t be speaking Norwegian any longer. After all, they were American. Jim remembers visiting Vesterheim as a 10-year-old in the mid-1950s, and though the visit made an impression on him, that interest in his heritage lay dormant for quite some time.

When Jim and Kathleen began their courtship and marriage, Kathleen especially remembers visiting Jim’s entire Norwegian-American family when they gathered for Christmas. Traditional holiday foods like lefse and lutefisk were brand new to Kathleen, and she remembers wondering, “Who would eat Jello-flavored fish?!”

Jim and Kathleen’s careers kept them plenty busy throughout the years. Jim worked for a utility company for 38 years and then as a utility company consultant for 10 years, and Kathleen was an art educator for 44 years. They joined Vesterheim as lifetime members in 1984, which they found to be a wonderful resource for conducting genealogical research about their Norwegian ancestors. But it wasn’t until a Vesterheim tour to southern Norway in 2016 that they really decided to experience all Vesterheim had to offer.

Jim, Kathleen, and two of Jim’s sisters went on the trip together as a family. Prior to their travels, Kathleen sent letters to try to connect with Jim’s relatives with the hope of meeting them if they existed! Almelia farm is in West Telemark, and the literal meaning of Almelia is “lone tree in the meadow.” Treungen is the name of the town nearest to the farm. Kathleen wrote letters to the post office, grocery store, and church in Treungen, asking for anyone who received a letter to please give it to an Almelien. The local pastor obliged and shared Kathleen’s letter with the Almelien family. The family connection was solidified and an organized meeting during the Vesterheim tour was arranged. They were able to meet Jim’s cousins that summer.

Another exciting moment happened on that trip. Kathleen sought a very special loom to purchase. She was told about a person who made only five looms each year. Kathleen inquired, but the price of the rare loom was awfully high. Kathleen and Jim continued their trip, but the thought of leaving that loom behind filled Kathleen with regret. As if knowing how special this loom would become to her, she decided to make the purchase. The beautiful pine loom made it to their home in Washington, Iowa, several months later.

As Kathleen tried to figure out how to use the loom, she bought a book by a weaver who was actually coming to Vesterheim for a three-day workshop the following year. Kathleen signed up for her first experience trying Scandinavian weaving, and she was hooked.

Upon retirement several years later, Jim and Kathleen were ready to dedicate more time to their exploration of Scandinavian folk art, an interest that had rubbed off on Jim by now as well. Jim shared, “When you’re married to an artist and craftsperson, you look at all these things out there in the world that we can do.” They planned to return to Norway and were each enrolled to take several classes at Vesterheim Folk Art School in 2020, and then the COVID-19 pandemic hit. They welcomed the online classes, workshops, and Zoom programs with open arms. Jim said, “They’ve been a godsend to us, because we can still be involved and listen to all sorts of great presentations.” With each new skill they learn, they develop more questions and begin thinking about what they’ll try next. Kathleen shared, “When you get knowledge, you have questions, and then you look for answers.”

Growing up on a dairy farm, Jim was a blacksmith out of necessity, learning to make his own tools and implements by hand. Through Vesterheim Folk Art School, he is learning techniques from the past that would have been useful all those years ago. Now he can explore these skills for the purpose of enjoyment rather than survival. Kathleen has had her own “aha” moments as well, most notably during a presentation about kubbestols by Rebecca Hanna, when Kathleen realized the similarities between the banding decoration on the top of the kubbestol and the banding of her own weaving. Kathleen describes making the connection as an unbelievable moment. She brings this curiosity with her to each new class she tries.

Today, Jim and Kathleen say their lives have been changed because of the resources they’ve been able to access and the networks they’ve formed. They have returned to taking on-site classes on Vesterheim’s campus in Decorah, which they treat as research retreats, but they continue to take as many online classes as possible. They can learn from the comfort of their home, and they especially enjoy taking classes with long-distance friends and family. Most of all, they cherish being part of this community at Vesterheim that is interested in saving knowledge. Kathleen said, “It’s the idea of the next generation not having to discover knowledge in the ground, but in a place.” Jim added a piece of wisdom he learned from an old Norwegian years ago: “The day you should quit learning is the day they bury you. Learn your whole life, because you don’t know everything.”

A loom brought Jim and Kathleen together, and folk art continues to fill their years with happiness and togetherness. They take pride in sharing that happiness with their children, who receive a Gift Membership to Vesterheim from Jim and Kathleen each year.

Their next learning adventure? Kathleen is trying new folk-art skills in hopes of learning how she can decorate her very special Norwegian loom. 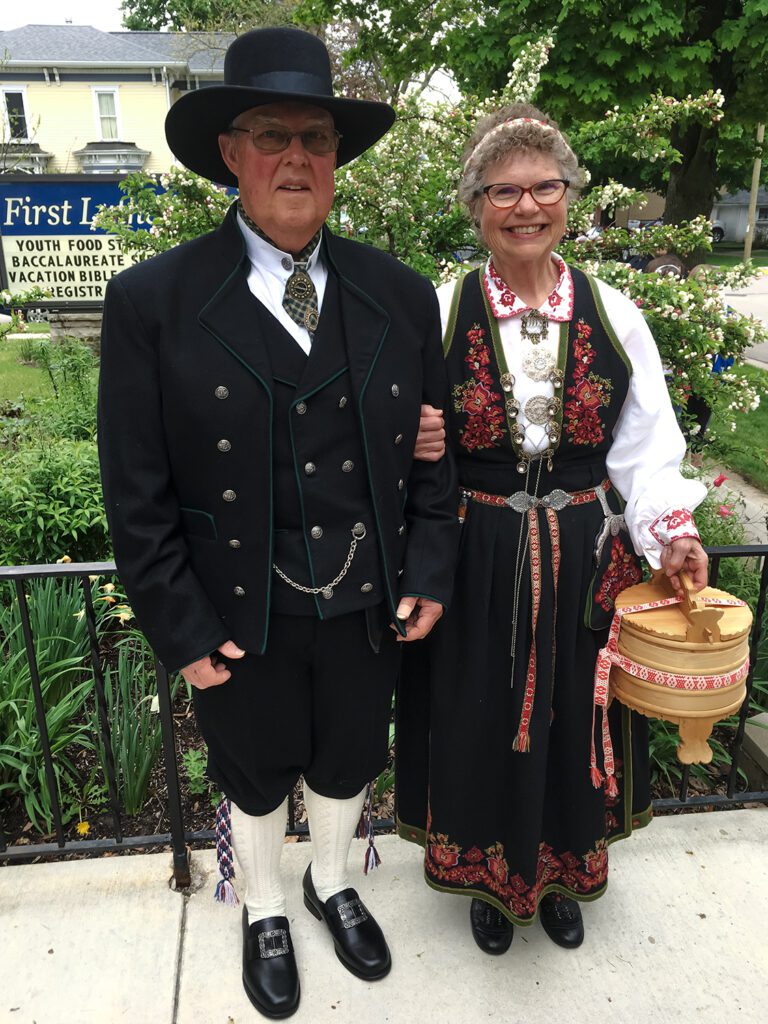 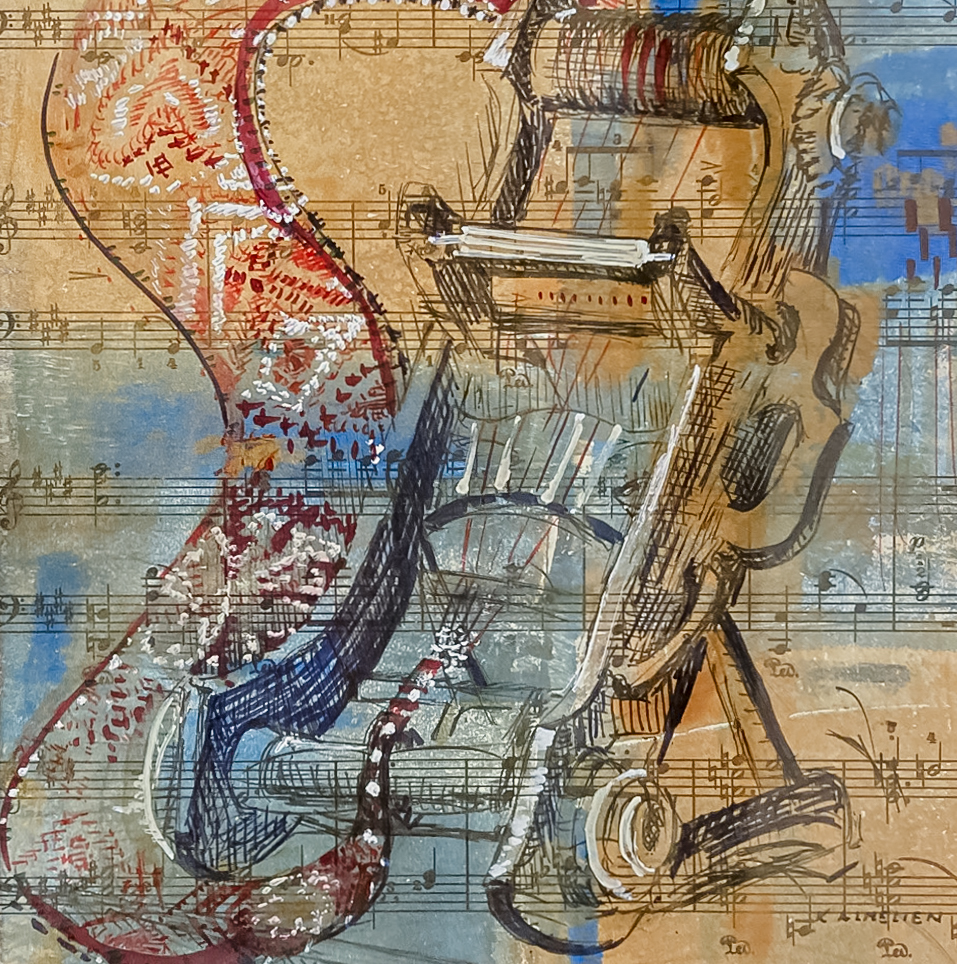 Print created by Kathleen titled The Song of Weaving.

Join Kathleen on September 28 from 7:00-8:00 pm CT for a webinar Symbols In Bandweaving: The Emojis of Traditional Handcraft, exploring the symbols used in bandweaving. Kathleen will highlight her own bands as well as those in Vesterheim’s collection and will draw parallels with the symbols used in other traditional Norwegian handcrafts. This program is free but registration for the Zoom link is required here.