The Tomsons, who live in Mason City, Iowa, have provided admirable levels of leadership and philanthropic support to Vesterheim for many years; O. Jay is a former Vesterheim Trustee and was part of the ‘Think Tank,’ a group of advisers to Vesterheim’s President/CEO in the early 2000s. In 2021, the exhibit and lecture series called Innovators & Inventors will open at Vesterheim thanks to the generosity of their foundation: The Tomson Family Foundation.

Sitting down with Pat and O. Jay to hear their story, it’s not hard to understand why they are so generous and such incredible supporters of Vesterheim. What is hard to understand, however, is how they seem to find the time to champion not only Vesterheim, but so many other organizations and causes. Yet they do, and the Midwest is better for it.

Pat grew up in Wausau, Wisconsin. Her mother’s parents came to America from Norway as young adults. Her grandfather lived with their family for many years while she was growing up, and she remembers how he enjoyed carrying on Norwegian traditions, especially at Christmas. Her grandfather got the Norwegian newspaper from Decorah, Decorah-Posten, which was published weekly. Pat remembers looking at the comic strips, but she couldn’t read the language. She explained, “People shied away from teaching Norwegian to the younger generations.”

O. Jay was born in Canton, South Dakota. His parents operated a small wheat farm at the time. They later settled in Stratford, Iowa, a small Swedish community. “We were the only people of Norwegian descent in the community. My father worked as a butcher at a locker, and I helped him as I got older. After graduating from high school, I went on to St. Olaf College in Northfield, Minnesota. That’s where I met Pat, and after that, I went into banking,” O. Jay said.

Pat and O. Jay met through mutual friends while attending St. Olaf, a small liberal arts college. Their courtship was probably quite a bit different than what college students experience today. Pat recalled, “We never had enough money to even go off campus – and there was no dancing allowed at the college! We got married while we were still students, and our wedding took place in a small chapel on the campus.” That was 63 years ago.

Once their life together began, Pat and O. Jay valued the things that many people do: family, their careers, and community. They had three daughters and found supportive church communities to belong to (where they especially enjoy the choirs and the wonderful Norwegian pastries and cuisine). O. Jay began his career in banking, starting with bank regulation work. He then went on to work with banks in Des Moines and Minneapolis. Later, O. Jay acquired controlling interest in several smaller community banks, which were merged into what is now First Citizens Bank in Mason City. “We’ve been fortunate to see the banks grow and thrive and have stayed loyal to the communities. Community banking has been my life’s work, and it is an industry where you help people,” O. Jay shared.

Pat, who studied sociology at St. Olaf, went on to get a master’s degree in counseling at the University of Northern Iowa after their daughters graduated from high school. Until retirement, she worked with Lutheran Social Services and also had a private practice where she worked with dysfunctional families. She was appointed to Governor Robert Ray’s commission to focus on the important work of helping sexual abuse victims. Pat stated that the most rewarding part of her career has been working with young children. Pat said, “To this day, people will come up to me and say, “Do you remember me?” And it’s fulfilling to know I helped them when they needed it.” Presently, Pat and O. Jay are working closely with the violence prevention program at the University of Northern Iowa.

While social work and banking form the pillars of the Tomsons’ philanthropic interests, the number of causes – and the number of people – they have helped and continue to help is extraordinary. O. Jay explained, “We’ve been fortunate to establish a family foundation that has supported higher education and community endeavors.” To name a few focus areas, the Tomson Family Foundation is helping to reduce the debts of student nurses and young people who are going into parish ministry. In addition, the Tomson Family Endowed Chair in Norwegian Language and Modern Nordic Culture at Luther College, a position that is currently held by Vesterheim Trustee Professor Maren Johnson, is something the Tomsons are proud of.

In 2006, O. Jay was awarded the prestigious St. Olav Medal from King Harald of Norway for “strengthening the bonds between expatriate Norwegians and their home country.” “It’s nice to be proud of your heritage, but we’re Americans,” O. Jay explained. “It’s eclectic here in America. Mason City has residents with up to 40 nationalities, and that’s one of the nicest things about being American: you get to know a variety of people with different backgrounds.”

When asked about their connection to Vesterheim, O. Jay said it was the gravity of Decorah that initially drew them here. “We were probably in town years ago for a Scandinavian celebration and stepped inside the museum. We’ve certainly enjoyed our relationship with Vesterheim over the years and seeing it grow.” The Tomsons have brought their children and grandchildren to visit Vesterheim, which have been very rewarding experiences. Each time they return, they find something new within the exhibits to appreciate or learn about.

O. Jay and Pat share excitement about Vesterheim’s future and the capital improvements like Heritage Park that will bring more visibility to Decorah, Vesterheim, and the beautiful area around it.

Vesterheim’s staff and Board of Trustees extend a sincere thank you to O. Jay and Pat for their friendship to the museum, as well as deep admiration for all they have accomplished.

Find out more about Vesterheim’s exhibit and lecture series Innovators & Inventors here. The exhibit is sponsored by the Tomson Family Foundation. 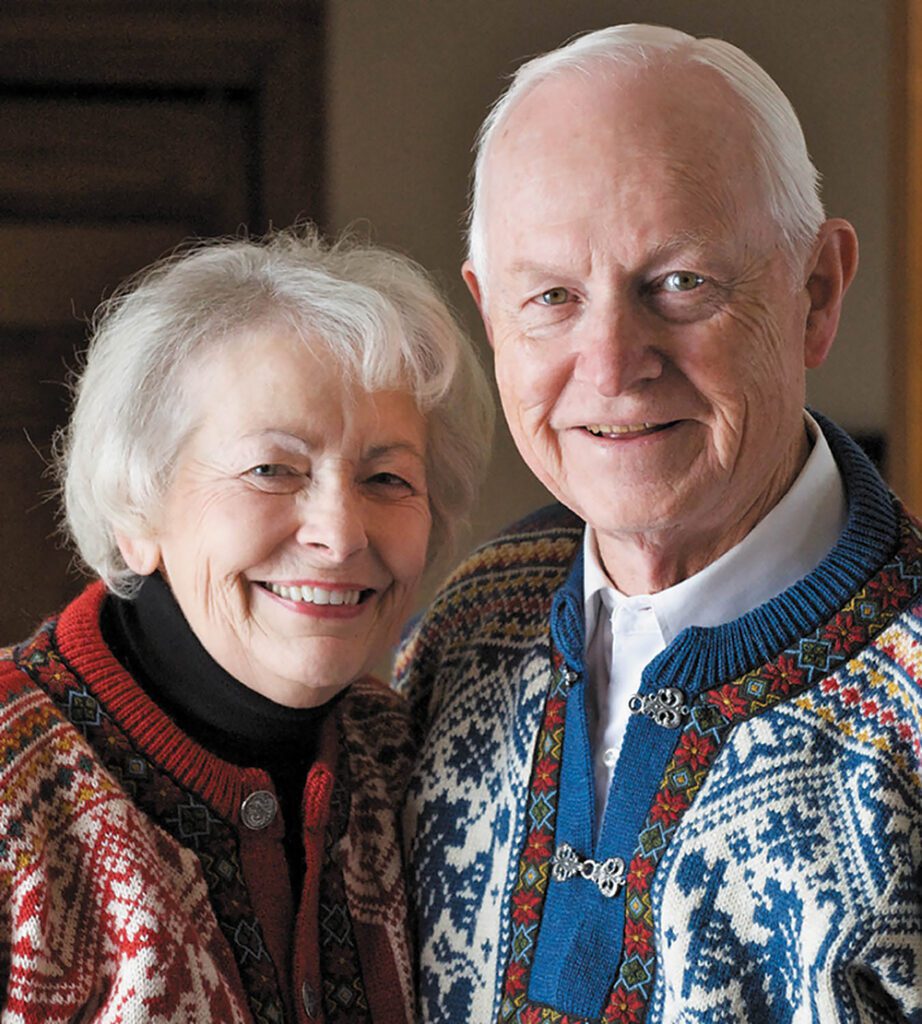