Vesterheim welcomes Rolf Svanoe as Tours to Norway Coordinator! Anyone who has traveled to Norway with Vesterheim has experienced the professional expertise and personal warmth of Vesterheim’s previous tour coordinators, including the most recent Katherine Johnson. We wish Katherine well now as she retires, and we will miss her leadership, organization, and kindness.

Rolf joined the staff in the fall of 2022 and has enjoyed an extended training with Katherine, so he is ready to make your future Vesterheim tour experiences fantastic. He will lead his first Vesterheim tour in 2023 – the Coastal Voyage.

There’s a lot to say about Rolf, who has many ties to Vesterheim, Decorah, Norway, Norwegian Americans, and overseas tours. He describes the household he grew up in as one that emphasized all things Norwegian. Both of his parents have Norwegian roots. Rolf’s father, Ansgar, grew up on the west coast of Norway and was twelve years old when the family moved to the United States in 1919. Throughout his life he loved sharing his Norwegian heritage giving lectures and presentations for Sons of Norway all over the U.S. In 1969, Ansgar was awarded the St. Olav’s medal by King Olav of Norway. Rolf’s mother, Melva, has roots in Valdres, Numedal, and Hallingdal.

As you might guess, Rolf has close relatives in Norway, and he has visited them many times. The Svanoe name comes from the island Svanøy in the west coast region of Sunnfjord. Rolf’s great-great-great grandfather bought the island in 1804 and took the Svanøe name. In 1814, he was elected to represent the area at the special assembly that met in Eidsvoll in November to amend the Constitution. He was one of its signers, a copy of which is proudly displayed in Rolf’s office.

Rolf has many close connections to Decorah. His uncle Harold was a professor at Luther College and his aunt Lucille taught in the Decorah Public Schools. Though Rolf had several siblings and cousins who attended Luther, he went to Augustana in Sioux Falls. He then attended Luther Seminary in St. Paul, Minnesota, and served for 36 years as a pastor in Wisconsin, South Dakota, and Minnesota.

This is where the tour guide part of his life comes in. As Rolf shared his love for his Norwegian heritage with his parishioners, they began to ask him to take them on a tour to Norway. So, Rolf planned his first group tour to Norway in 2008. That was the start of over a dozen tours since then all over Europe, Israel, and Egypt, including three more tours to Norway. Rolf has become very familiar with Norwegian genealogy and often connected people on his Norway tours with their ancestral roots when possible.

Rolf and his wife Kimberly moved to the area in 2016 to be closer to grandchildren. (Kimberly also has close family in Norway whom they have visited several times.) Rolf served a church in Harmony, just across the Minnesota border. He says he took this call because he was hoping to serve a church that had a lutefisk supper. After four and a half years in Harmony, he retired and moved to Decorah. Rolf became involved at Vesterheim as a volunteer docent. He also sings with the Luren Singers and plays trumpet in the community orchestra. He says that nothing could have convinced him to come out of retirement except this part-time Tours to Norway Coordinator position at Vesterheim.

His family connections, extensive travel, and tour guiding experiences make him a perfect fit for Vesterheim. He’s excited to continue organizing Vesterheim tours into the quality, fun, educational, and special experiences they are known as, and he has ideas to expand and enhance the program. Join us in welcoming him on board and get ready to tour with Vesterheim in coming years! 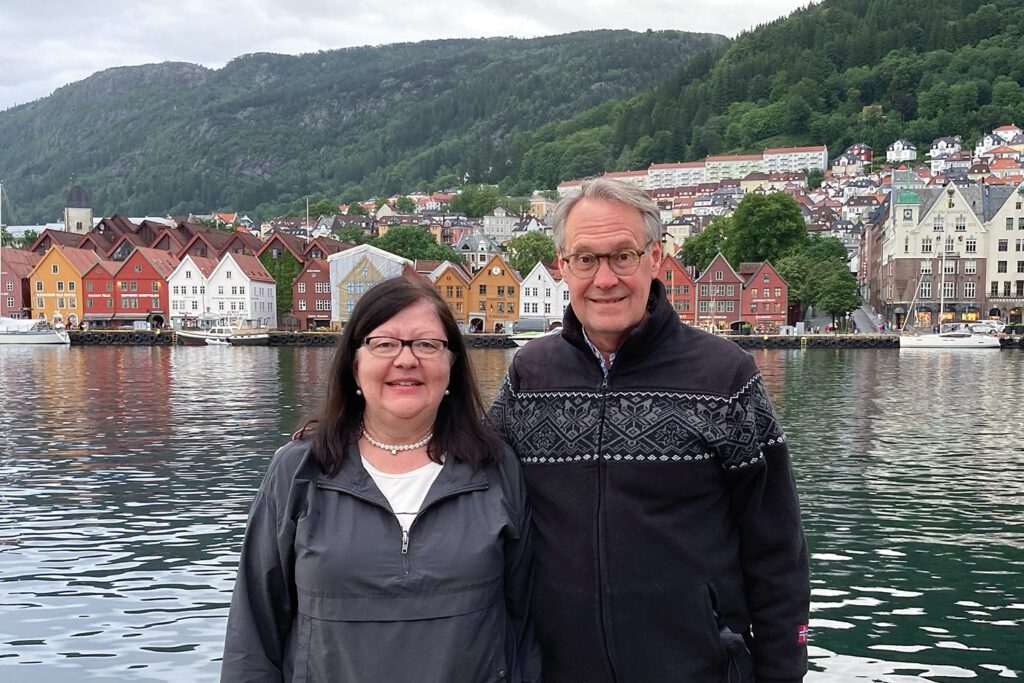 Kimberly and Rolf Svanoe in Bergen, Norway, in July 2022.

Start making plans to travel with Vesterheim! Current and past tour itineraries are featured here.

If you wish to be notified each summer of the tours we are planning for the following calendar year, please send your name, email address, and contact information to Rolf Svanoe at: NorwayTours@vesterheim.org, or call 563-382-9681, ext. 240.