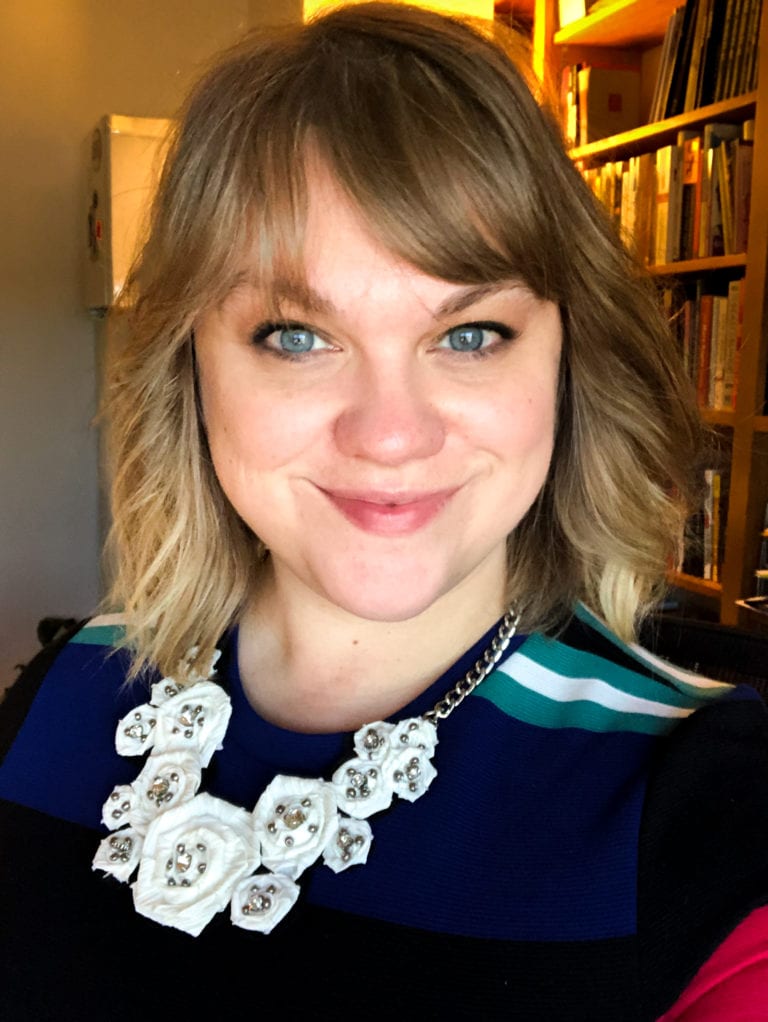 On Tuesday, October 29th, Lindsey Row-Heyveld gave the second lecture in a three-part series of lectures on “Tattoos, Medievalism, and White Supremacy”. Lindsey is an Associate Professor of English at Luther College. The lecture is one of several in a series related to the exhibit, Tattoo: Identity Through Ink, on view at Vesterheim, the national Norwegian-American Museum and Heritage Center, through April 2020.

Lindsey teaches a Medieval literature class at Luther, and she often raised the question of how “Medievalism” plays a part in today’s society. Medievalism is a post-Medieval fantasy of the Medieval Period. Lindsey explains that the issue lies in the way that white nationalists use the symbols of the Medieval Period as a means for making the claim that they come from a powerful, superior race of people. They believe that Medieval Europe, along with the symbols that embody the time period, was a strictly white society. This is not the case at all and, in fact, it was actually an incredibly diverse region of the world, as seen through historical evidence and archaeological evidence.

This raises the question of how Nordic tattoos can become a part of what Row-Heyveld refers to as “Schrödinger’s Medievalisms,” a phrase coined by medievalist Paul B. Sturtevant. Nordic tattoos are a way in which people can proclaim their identity and solidarity within the Nordic culture, but the use of these same symbols by white nationalists causes a negative connotation to be attached to these beloved Nordic symbols. The term “Schrödinger’s Medievalisms” stems from the idea of the famous scientific paradox “Schrödinger’s Cat,” presented by Erwin Schrödinger in 1935. The claim is that if you place a cat into a completely sealed box with something that could potentially kill the cat, you are unable to know if that cat is dead or alive without opening the box. So, with only the information given, you cannot discern whether or not the cat is dead or alive. Row-Heyveld presents the idea that a medieval symbol, let’s say a tattoo that is seen out in the world, might be considered a negative symbol used by white nationalists to promote their beliefs. But this same tattoo might also simply be a symbol of pride for someone of Nordic descent, with no negative connotations at all. This forces people to see the symbol through both negative and positive lenses, because they are not given any more information about which way this symbol is meant to lean. It is a frustrating task for people who have no right-wing nationalist beliefs, but it is one that has been discussed by people who harmlessly use these symbols.

Maren Johnson, an Assistant professor of Scandinavian studies at Luther College, attended the lecture and she gave her take on the lecture from her position as a professor. Johnson teaches classes that include Norwegian language, along with Nordic literature and culture.

“As a professor, I see my role as a guide to help students ask and respond to the most pressing questions of our time. The misappropriation of Nordic symbols by white nationalists is extremely troubling and very problematic because their images of the Nordic region are misfounded and incorrect. Therefore, it is my duty to challenge these images and create positive, safe spaces for students to engage in challenging conversation about these issues and how, collectively, we work together to combat the symbolic fallacies.

The biggest takeaway from this lecture was that Lindsey Row-Heyveld promotes a vigilance in protecting Nordic heritage from being seen in the negative light that white nationalists cast. While they use the symbols to promote their hateful beliefs in a way that may slide under the public eye, we must promote the heritage in a way that is clearly distinct from any  hateful aspects of the symbols used. It is an important thing for everyone to be aware of, especially among those who take great pride in their Norwegian heritage.

You can check out Tattoo: Identity Through Ink  here, under special exhibits!